The book launch on February 21, 2018, was coordinated with the monthly Systems Thinking Ontario meeting at OCAD University. The event was promoted on Eventbrite.

The presentation slides (including source files) are available on the Coevolving Commons.

An outline of the event is described on the Coevolving Innovations blog.

The canonical version of the book is now the ePub3 version. The text and diagrams are easier to read on a tablet than the A4 PDF. This version embeds tables and scalable vector graphics (SVG), which may not be rendered perfectly on all devices.

The electronic publishing process unfortunately separates out the cover from the interior content. 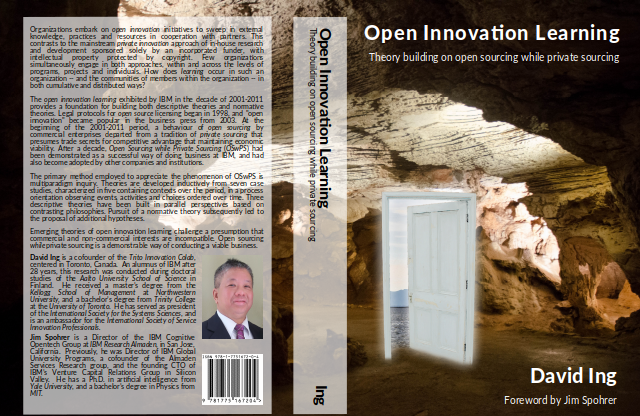 The follow abstract appears on the back cover of the book.

Organizations embark on open innovation initiatives to sweep in external knowledge, practices and resources in cooperation with partners. This contrasts to the mainstream private innovation approach of in-house research and development sponsored solely by an incorporated funder, with intellectual property protected by copyright. Few organizations simultaneously engage in both approaches, within and across the levels of programs, projects and individuals. How does learning occur in such an organization -- and the communities of members within the organization -- in both cumulative and distributed ways?

The open innovation learning exhibited by IBM in the decade of 2001-2011 provides a foundation for building both descriptive theories and normative theories. Legal protocols for open source licensing began in 1998, and "open innovation" became popular in the business press from 2003. At the beginning of the 2001-2011 period, a behaviour of open sourcing by commercial enterprises departed from a tradition of private sourcing that presumes trade secrets for competitive advantage that maintaining economic viability. After a decade, Open Sourcing while Private Sourcing (OSwPS) had been demonstrated as a successful way of doing business at IBM, and had also become adopted by other companies and institutions.

The primary method employed to appreciate the phenomenon of OSwPS is multiparadigm inquiry. Theories are developed inductively from seven case studies, characterized in five containing contexts over the period, in a process orientation observing events, activities and choices ordered over time. Three descriptive theories have been built in parallel perspectives based on contrasting philosophies. Pursuit of a normative theory subsequently led to the proposal of additional hypotheses.

Emerging theories of open innovation learning challenge a presumption that commercial and non-commercial interests are incompatible. Open sourcing while private sourcing is a demonstrable way of conducting a viable business.

David Ing is a cofounder of the Trito Innovation Colab, centered in Toronto, Canada. An alumnus of IBM after 28 years, this research was conducted during doctoral studies of the Aalto University School of Science in Finland. He received a master’s degree from the Kellogg School of Management at Northwestern University, and a bachelor’s degree from Trinity College at the University of Toronto. He has served as president of the International Society for the Systems Sciences, and is an ambassador for the International Society of Service Innovation Professionals.

Jim Spohrer is a Director of the IBM Cognitive Opentech Group at IBM Research Almaden, in San Jose, California. Previously, he was Director of IBM Global University Programs, a cofounder of the Almaden Services Research group, and the founding CTO of IBM’s Venture Capital Relations Group in Silicon Valley. He has a Ph.D. in artificial intelligence from Yale University, and a bachelor’s degree in Physics from MIT.

The cover was designed with Celina Laurette. 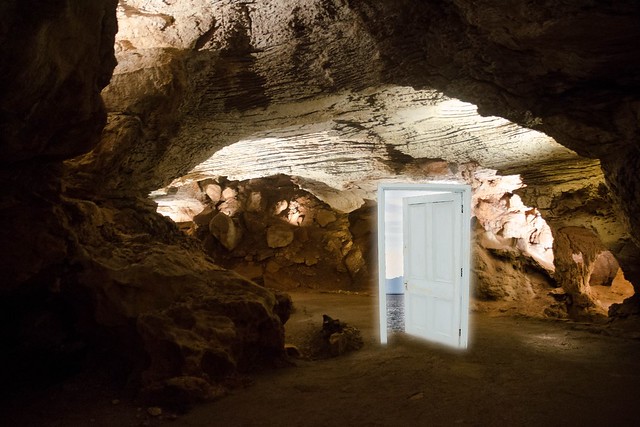